The Trouble with Normal: What the Protests Mean to One Black Son

Dave Nichols, a member of The Ohio Fair Courts Alliance 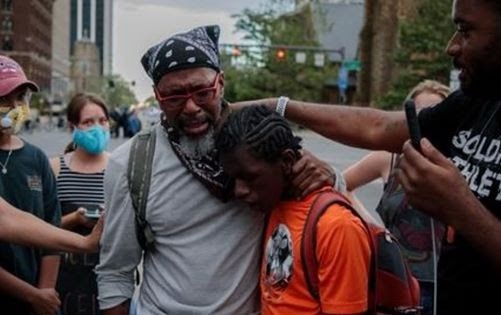 I saw this photograph (from Columbus Dispatch) of a father beginning to cry, embracing his teenage son, while speaking to a local police deputy chief during protests earlier today.

When I bought my first car as a teenager, my dad made me keep my registration tucked into the passenger visor-mirror of my car. At the time, I thought he was being old and country. He said if I was ever pulled over and an officer asked for my registration, I should raise my hands, point to it, and ask permission to grab it, before grabbing it. I realize now how difficult this lecture may have been for my father to give, how difficult it would be for me to give.

During my first month at college, someone crashed into me in an intersection. I called 911, and when the officers came, they pulled me out of the car bleeding from the accident, patted me down, swore at me, and threw me into their police car.

I’ve been pulled over dozens of times (dozens) just to be asked where I was going and what I was doing. I’ve been pulled over while simply walking in front of my own house by an officer I would see every afternoon at my gas station job at college. An officer once aimed his taser at me and sparked it up to laugh at how I reacted and was offended when I was offended. I’ve had a ticket thrown out at court because the citation I’d been given didn’t correspond to any known traffic laws. Once, blocks from my mother’s house, I was pulled over by police officers who approached me with their pistols raised because, as the officer had yelled, I didn’t pull over far enough (an event I couldn’t tell my mother about because it would agonize her).

I don’t like talking about this because it makes me feel terrible and usually someone in ear-shot has a much worse story to share. I have no doubt had it comparatively easy. A woman told me once she’d been tased in the groin by officers at a restaurant when she argued with a server over the price on her bar tab. An old friend with asthma had been forced to lie face-down on the ground by the highway in handcuffs for 45 minutes for not having a tail-light that worked. These things that happened are all normal, not video-recorded, not sensationalized by newspapers. These things can make reasonable people paranoid, or stoic, or self-destructive, or artful, or angry, or compassionate, or numb. Trauma always goes somewhere.

The videos circulating of pointless, extrajudicial killings are brutal. I see Garner following the advisable steps, unarmed, not resisting, expressing that he can’t breathe, and I see (I can’t help it) myself, my cousin, my father, my best friend. The message is that if you let your guard down (and if you’re brown), the wrong officer, the wrong afternoon, the wrong neighborhood, some psycho can murder you in broad daylight, in public, on national television even, then tell your family you deserved it, and go collect his wages.

I’m worried that if I watch George Floyd’s murder footage, where I’m told that he cried out for his mother while being choked to death, I won’t be able to sleep, to go to work.

With the narrative being about the legitimate and illegitimate uses of rioting, and so forth, I’m choosing not to virtually engage with anyone for the moment, but I do wish (as probably everyone does in their way) that the public dialogue will exercise more imagination this time, especially since even the youngest of us have now endured the cyclicality of these televised killings, which themselves are only the small peaks of large icebergs.

Smashing an innocent shop-owner’s store-window with a trashcan, for example, sounds like a terrible thing because reasonable people see out-of-context vandalism as a breaking of the peace, peace being the obvious default. Instead, we ought to also consider the amount of violence needed in the background just to keep things functioning how they are today. The number of families decimated by the generations-long war on “drugs.” The real and imminent threat of violence that a significant minority of Americans feel all their lives, the arbitrary and deadly threats they cannot shield their teenagers from, their toddlers from, who are afraid to call 911 because maybe the officer is having a bad day and will murder your niece or nephew, who are afraid to pull over for flashing lights because the shiny reflection of your cell phone, or your keychain, or your facial expression may startle an officer into shooting you.

Weigh this kind of passive violence, that is so typical here that many of us don’t even see it (and yet so undeniable that some dog walker can matter-of-factly weaponize it), against the collateral short-term aftereffects of a protest. Wherever you land might make sense. But then consider whether a reformation of policies to hold law-enforcement officers and departments -our own public offices- that we pay for and ought to be allowed to criticize, to improve- accountable for purposeless killing [things like clearer standards of engagement, community-approved, objective guidelines of use-of-force spectrums, or independent offices of police investigation] is too expensive a demand even in exchange for a possible future when millions of parents will not sleeplessly dread the day their kids pass a drivers’ test.

To the people who are choosing to risk their health, their freedom, their time, to speak out and protest racism this week, and who are fighting exhaustion and rubber bullets because of their respect for black life: thank you, bless you!, and I love you. 🙏

To support our people in Columbus standing up against the police and for Black life: