In the upcoming election, two seats for the Supreme Court of Ohio are up for grabs and the stakes couldn’t be higher.

While state Supreme Court races aren’t usually ​top of mind for voters, now is not the time to skip voting for judges in Ohio.

The Ohio Supreme Court will hear any legal challenges to the new state legislative and congressional lines that will be redrawn in 2021. Also important, utility cases involving the Public Utilities Commission of Ohio (PUCO) all go directly to the Ohio Supreme Court.

There could be a shift in the court’s dynamics. Were Democrats to win both seats, they would seize control of Ohio’s top court, currently a 5-2 majority for Republicans, for the first time in a generation.

Making meaningful reforms to combat racial and poverty disparities in the criminal justice system as well as judicial bias is another reason why who’s on the bench matters.

Despite the high stakes, people often know very little about how the Ohio Supreme Court operates, the impact of the courts, the judges they elect, or how to evaluate them to make an informed decision.

Structure of the Ohio Supreme Court

The Ohio Supreme Court is the highest court in Ohio with a Chief Justice and six Justices. 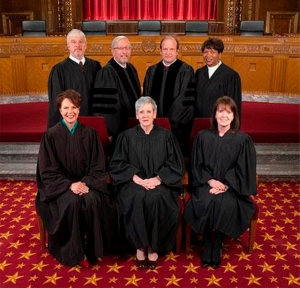 The justices decide all state constitutional questions, cases involving questions of public or general interest, and all criminal appeals where the death penalty has been imposed.

The Supreme Court also makes rules about the operation of the courts and the practice of law in Ohio, and it has the authority to discipline lawyers and judges for misconduct.

To qualify, a person must be an attorney with at least six years’ experience in the practice of law, must be admitted to the Ohio Bar, and must be younger than 70 years old to be elected or appointed to the Supreme Court. Appointments are made by the Governor for vacancies that may occur between elections.

Why Are There Judges on Your Ballot?

A seat for the Ohio Supreme Court is decided by an election with a six-year term. Ohio has a semi-partisan method for electing state Supreme Court justices that includes both partisan and non-partisan electoral contexts.

Campaigns for judicial office must be conducted differently from campaigns for other offices. Judicial candidates have a special obligation to ensure the judicial system is viewed as fair, impartial, and free from partisanship.

When a person becomes a judicial candidate, they become subject to Canon 4 of the Ohio Code of Judicial Conduct which states:

“A judge or judicial candidate shall not engage in political or campaign activity that is inconsistent with the independence, integrity, or impartiality of the judiciary.”

Why Should We Be Concerned with Judicial Elections?

For a very simple reason, a judge may be the most important person you meet on one of the worst days of your life.

Think about the direct impact a judge can have on your life. A judge can decide during divorce how often you get to see your children. During a criminal case, the judge, if you are guilty, decides your sentence.

In addition, several landmark cases have stemmed from Ohio Supreme Court rulings. Terry v. Ohio, still the law today regarding “stop and frisk” measures taken by police officers, went all the way up to the United States Supreme Court.

Most recently, the Ohio Supreme Court reaffirmed Ohio’s death penalty criteria as constitutional and denied a citizens’ initiative request for leeway in signature-gathering during COVID-19.

Important upcoming cases include rulings on guns in schools where the Court will decide the amount of  training that can be required for public school teachers to carry firearms in classrooms.

Who is elected to the bench also matters as judges can have a direct impact on the kind of reforms necessary to combat racial and income disparities as well as judicial bias in the criminal justice system.

When the public perceives biased behavior by court officers (judges, juries, prosecutors, public defenders), it diminishes their confidence in the quality and fairness of the entire justice system.

In her Independence Day statement on criminal justice reform, Ohio Supreme Court Chief Justice Maureen O’Connor stated, “This lack of trust in our judicial institutions should alarm us and be a call to action.”

One such reform is at the Ohio Supreme Court as we speak. Before she retires, one of Chief Justice O’Connor goals is to implement a statewide sentencing database. This includes collection of statewide criminal justice sentencing data to determine if racial disparities or other inconsistencies exist from court to court.

Currently, aggregate data regarding pre-trial and sentencing practices in relation to race, gender, ethnic background, or religion does not exist in Ohio in a standardized format.

This data gap denies decision makers and the public necessary information upon which to enact policies and laws to ensure that all are treated equally under the law.

“The law recognizes the importance of equal justice. But it is up to our court systems, the judges, and the lawyers to ensure that the constitutional guarantees are applied equally.” ~Chief Justice O’Connor

Who is on the Ballot for the Ohio Supreme Court?

Justice French became a justice of the Supreme Court of Ohio in January 2013 and was elected to her first full term in 2014. Judge Brunner has served for more than 5 years as an elected judge of the Ohio Tenth District Court of Appeals in Columbus. She served as Ohio Secretary of State from 2007-2011.

How Do You Decide? Ways to Evaluate Judicial Candidates

But because of limitations on judicial campaign communications, people know very little about the judges they elect.

Experts in the field advise, “voters should choose those judges whose previous legal careers demonstrate that they are open-minded, having a record of dealing fairly with people of all backgrounds, not beholden to any particular interest group, and admired and trusted by their peers and by those with whom they have interacted professionally.”

As bar ratings are one of the ways voters can evaluate judges running for the court, the Ohio State Bar Association (OSBA) Commission on Judicial Candidates, a bipartisan panel, released its ratings of the four candidates.

“Judges make decisions that affect the everyday lives of Ohioans and voters should have access to facts that will allow them to make an informed decision at the polls come November,” said Commission Chairman Martin Mohler.

An endorsement by an individual or group can be another way to evaluate judicial candidates. The current candidates have garnered endorsements from groups and organizations such as the Ohio Fraternal Order of Police, Ohio AFL-CIO, and the Ohio Chamber of Commerce PAC. Many times, candidates will display their endorsements on their campaign websites.

Who’s Contributed to Their Campaigns

A candidate’s campaign contributors may also help determine which judge gets your vote because in Ohio, Supreme Court justices are allowed to hear cases from their contributors.

As such, the potential negative effects of campaign finance on judicial impartiality and independence should be of great public concern.

Judicial forums are another way for voters to evaluate judicial candidates. All four Ohio Supreme Court candidates participated in a virtual candidate forum hosted by the Ohio Debate Commission which was broadcasted across the state.

Should you participate in a forum or debate, there are questions judicial candidates cannot answer. Judicial candidates may not state their opinions, or make a commitment or promise in connection with issues likely to come before the court.

See the below “Additional Resources” page and get the information you need to make an informed decision and then go vote!