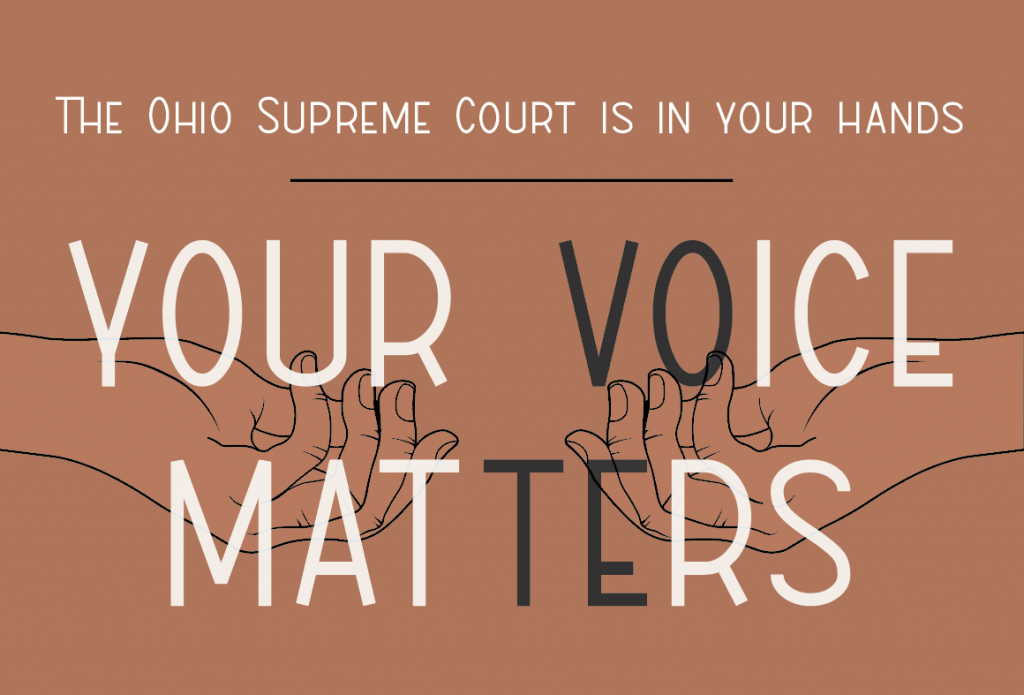 On November 8, voters will elect three justices for the Ohio Supreme Court: a chief justice and two associate justices. This is a high-stakes race for control of the court and there’s a lot to consider.

While state Supreme Court races — or any judicial race for that matter — aren’t usually on the top of voters’ minds, now is not the time to skip voting for judges in Ohio. Who sits on the bench matters.

Ohio is one of four states where the partisan balance of the state’s highest court could change as a result of the 2022 elections. Currently, there is a 4-3 Republican majority. Three seats held by Republicans are on the ballot in 2022.

There is a lot on the line. High-stakes issues such as redistricting, reproductive rights, voting rights, and LGBTQ+ rights are just a few of the issues the Ohio Supreme Court has, can, or will decide on.

Underlying the importance of these races is the vast amount of money being spent on these three seats. Ohio is one of the top three states in the U.S. that has the highest spending in state supreme court races so far. As of October 31, the Brennan Center estimates Ohio’s total ad spending on Ohio Supreme Court TV ads is nearly $1 million.

In addition, for the first time, this year’s ballot will include the Supreme Court candidates’ party affiliations and the race will be moved up the ballot to be grouped with other statewide offices instead of being listed down below.

Despite the importance of judges, people often know very little about how the Ohio Supreme Court operates, the impact of the courts, the judges they elect, or how to evaluate them to make an informed decision when casting their vote.

Structure of the Ohio Supreme Court

The Ohio Supreme Court is the highest court in Ohio with a Chief Justice and six Justices.

The chief justice is responsible for the administration of the judicial branch in Ohio, including monitoring court caseloads, overseeing rule-making of local rules and adaptations of state court rules, and ensuring that laws, regulations, and court policies are followed.

The justices decide all state constitutional questions, cases involving questions of public or general interest, and all criminal appeals where the death penalty has been imposed. The Supreme Court also makes rules about the operation of the courts and the practice of law in Ohio, and it has the authority to discipline lawyers and judges for misconduct.

A person must be an attorney with at least six years’ experience in the practice of law, must be admitted to the Ohio Bar, and must be younger than 70 years old to be elected or appointed to the Supreme Court. Appointments are made by the Governor for vacancies that may occur between elections.

Why Are There Judges on Your Ballot?

A seat for the Ohio Supreme Court is decided by an election with a six-year term. Ohio used to have a semi-partisan method for electing state Supreme Court justices that included both partisan and non-partisan electoral contexts.

With the passage of Ohio Senate Bill 80, that has changed. This year’s general election ballot will include the Supreme Court candidates’ party affiliations and the race will be moved up the ballot to be grouped with other statewide offices. This will also be the case for appellate court races. All other judicial races will be down ballot.

Campaigns for judicial office must be conducted differently from campaigns for other offices so as to foster and enhance respect and confidence for the judiciary. Judicial candidates have a special obligation to ensure the judicial system is viewed as fair, impartial, and free from partisanship.

The rules for judicial campaigns are spelled out in Canon 4 of the Ohio Code of Judicial Conduct.

Three out of the six candidates running, Justice Jennifer Brunner, Judge Terri Jamison and Judge Marilyn Zayas, have signed the Ohio State Bar Association’s “clean campaign agreement,” agreeing to conduct their campaigns in accordance with the pledge, and in line with the guidelines in Canon 4 of the Ohio Code of Judicial Conduct. Justices Pat DeWine, Pat Fischer, and Sharon Kennedy have declined to sign the pledge this year.

Why Should We Be Concerned with Judicial Elections?

Who is elected to the bench matters as judges have a direct impact on our daily lives. The next court is expected to hear cases on topics with the potential to re-shape Ohio’s politics and the lives of its residents, including abortion access, fair voting maps, judicial recusal, bail reform, and so much more.

In a protracted redistricting legal battle, state legislative maps were determined to be unconstitutional gerrymanders five times and congressional maps twice. A bipartisan majority of the Ohio Supreme Court, including Justice Brunner, repeatedly tossed out a series of maps, saying they did not meet the constitutional parameters approved by Ohio voters. Justices Kennedy, DeWine, and Fischer dissented, writing that both maps met Ohio’s constitutional standards.

Ohioans are voting in unconstitutional voting districts and the outcome of November’s Ohio Supreme Court elections could change how future redistricting cases are decided.

In Dubose v. McGuffey, the court recently ruled on whether public safety is a consideration with respect to the financial conditions of bail. In a 4-3 decision, with Justice Brunner as part of the majority, the Ohio Supreme Court upheld a decision by an intermediate state appellate court to reduce the bail of a criminal defendant from $1,500,000 to $500,000, deeming the $1.5 million excessive and reiterated that the sole purpose of bail is to ensure a person’s attendance in court.

Justices and candidates for the Ohio Supreme Court Sharon Kennedy, Pat Fischer, and Pat DeWine disagreed with the majority and each wrote a dissenting opinion. All three support a constitutional amendment on this year’s ballot, Issue 1, that would require judges to consider public safety when setting bail, effectively ignoring the ruling in Dubose v. McGuffey and removing the Ohio Supreme Court from oversight of bail rules and instead, giving that power exclusively to lawmakers.

In June, the U.S. Supreme Court overturned nearly 50 years of legal precedent with its ruling in Dobbs v. Jackson Women’s Health Organization that eliminated the constitutional right to abortion established in Roe v. Wade. Going forward, abortion rights will be determined by the states, putting state supreme courts at the forefront of upholding reproductive rights.

Currently, an Ohio law banning virtually all abortions will remain blocked while a state constitutional challenge proceeds. This preliminary injunction will allow pregnancy terminations through 20 weeks’ gestation to continue for now.

Who is on the Ballot for the Ohio Supreme Court?

Justice Brunner was elected to the Supreme Court of Ohio in 2020. She served for more than five years as a judge of the Ohio Tenth District Court of Appeals. She served as Ohio Secretary of State from 2007-2011.

Justice Kennedy was re-elected in November 2020 for the second time to a full term on the Supreme Court. She first joined the court in 2012, having been elected to fill an unexpired term and was elected to her first full term in November 2014.

Justice DeWine began his six-year term on the Supreme Court of Ohio in 2017. He previously served for four years on the Ohio First District Court of Appeals, and the Hamilton County Common Pleas Court.

Judge Zayas was elected to the Ohio First District Court Of Appeals in 2016. Since joining the court, she has sat by appointment of Ohio’s Chief Justice on the Second, Sixth, Eighth, and Tenth District Courts of Appeal.

Judge Jamison was elected to the Ohio Tenth District Court of Appeals in 2020. She previously served on the Franklin County Court of Common Pleas in 2012, and was re-elected in 2018.

How Do You Decide? Ways to Evaluate Judicial Candidates

People know very little about the judges they elect because of limitations on judicial campaign communications. Where other candidates for office can make campaign promises, judicial candidates cannot.

Bar ratings are one of the ways voters can evaluate judges running for the court. Judge4Yourself is made up of five cooperating bar associations and provides ratings, interviews with the candidates, and reviews the candidates’ answers to the questionnaire.

These ratings can be used to gauge prospective judges’ and justices’ ability to perform their job. Their ratings of the candidates for Ohio Supreme Court can be found here.

An endorsement by an individual or group can be another way to evaluate judicial candidates. The current candidates have garnered endorsements from groups and organizations such as the Ohio AFL-CIO, Ohio Right to Life, Buckeye Firearm Association, Ohio Women’s Alliance, political office holders, and the editorial board of Cleveland.com and The Cleveland Plain Dealer.

Who’s Contributed to Their Campaigns

A candidate’s campaign contributors may also help determine which judge gets your vote because in Ohio, Supreme Court justices are allowed to hear cases from their contributors. As such, the potential negative effects of campaign finance on judicial impartiality and independence should be of great public concern.

Resources to Prepare for the Ohio Supreme Court Elections

We are at a critical point right now where state supreme courts are more important than ever. Voters have the power to shape our supreme court and need to know whether a candidate will be fair, impartial, and independent in their administration of justice.

Here are several ways to get more information about the Ohio Supreme Court election and the candidates running.

Judicial Votes Count is administered by the Ohio State Bar Association. It provides a voter guide where Ohio voters can read what candidates say about themselves.

Vote for Justice, not politics is a comprehensive voter education guide from Ohio Voice. It contains information about why races matter, what’s at stake, the candidates, and how to vote.

Judge the Ads is a project from Common Cause Ohio that encourages Ohio voters to question and critique political ads they see about candidates running for the Ohio Supreme Court. This site gives people the tools to be able to “follow the money” behind the advertising. You can explore the ads here.

The Ohio Supreme Court’s website is a helpful resource to learn more about the court. For information on candidate campaign contributions, visit the Ohio Secretary of State. Other resources are social media, Google, judicial opinions, and the candidates’ websites.

Be an educated voter and research judicial candidates so that you can make an informed decision when you cast your ballot. Talk to your family, friends, and neighbors about the importance of voting for judges and share this information with them. And make a plan to vote too! Election Day is November 8, so be sure to cast your ballot early, return your absentee ballot, or vote at your polling site on November 8.